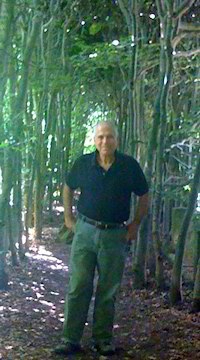 Close to 500 people came to Gangaji’s and my meeting in Berlin.They were alive and bright and deep. The questions reflected a depth of experience and insight that I had not seen before on such large a scale.

We are in Baden Baden now, in a silent retreat with 150 people from all over Europe. We have been leading retreats like this for years here. But this time is different. People we were just meeting, people we have known for years, people from other teachers, no teachers, young people and old, all are reporting a depth of consciousness and realization that we have not seen before on so large a scale.

And, yes, the hotels greet us with openness and warmth, and the air is freer now as well. Could this be my own projection? Of course. And yet in my twenty-five years of coming here, it is a new and startling experience for both Gangaji and me.   I am not one given to premature shouts of hope. I have seen all the various predictions come and go over the past forty years. Our commune in Oregon supported Tim Leary’s vision of the comet Kahoutec in 1973, as the coming of the New Age. A decade later Gangaji and I sat on a mountaintop in support of the “harmonic convergence,” and I am aware of the Mayan calendar and all the other predictions of the dawning. I have become a bit skeptical over the years.

But I must say loud and clear, from my perspective the dawn is here now. Consciousness conscious of Itself has spread to a critical mass. People are discovering themselves and living lives of freedom and peace on an unprecedented scale. The fire is alive in many hearts and is spreading.

It is our opportunity to jump into this holy fire ever more deeply, to surrender ourselves ever more fully; to light up the day with the fire of love. The Truth is true and alive in the land. We can celebrate the widespread shining of love by being the love that is alive in each heart. We are the fire and we spread from heart to heart. We may not live to see the daybreak spread across the planet, but we are the sunrise and the fingers of dawn are here.